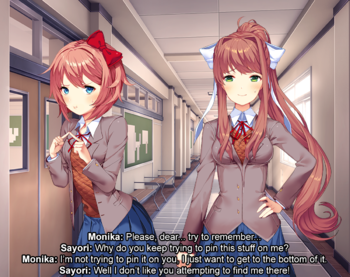 A typical day for them.
Sayori: Hey Moni, want to go to the mall after the club?
Monika: Sure thing! I mean, I have piano lessons, but I can just delete the teacher~
Sayori: ...please don't do that.
Advertisement:

is a fan comic written by Yui based on the popular horror visual novel Doki Doki Literature Club!. The webcomic picks up after the ending of the original visual novel after Monika had deleted everything. While floating endlessly in the void, Sayori confronts Monika, demanding that she give her, Yuri, and Natsuki another chance at happiness. As such, Monika and Sayori function as the main characters to a degree, with the main premise initially being keeping Natsuki and Yuri from discovering Monika's reality-warping abilities.

The story can be read in chronological order here

; the story arcs can be seen here

, and a link to Yui's page is present here