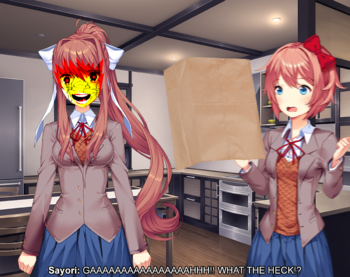 Monika's face on a bad day.

While certainly not as immensely disturbing as its source material, there are still moments that remind you of what this fan comic was based on.

Give up hope. There is nothing left to do. She is not like the rest of you. Don't give her a chance. There's no point in fighting it. Run. RUN. RUN