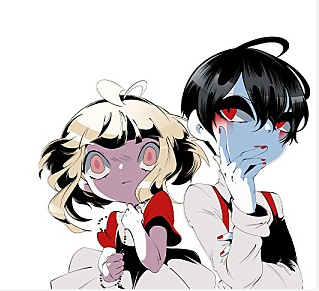 Don't forget about your teddy bear or else
"If everything I make does the opposite of what I build it to do - I know what I must create! If what I create becomes monsters... Then a monster I must make!"
— The Toymaker
Advertisement:

The Dummy's Dummy is an on-going Horror Webcomic created by Mochamura. It first featured on Tapas in 2016 before also updating on Webtoon as a Canvas series, before finally being promoted to original and rebooting on January 12th, 2022.

The flawed creations of a toymaker have a mind of their own, a very murderous one. After realizing the true nature of his creations, the toymaker created Paris, a ventriloquist's dummy, whose purpose was to keep the other toys in line.

The story revolves around Yumi, a young girl with psychic abilities whose grandfather has recently passed away. Unfortunately her problems don't end there. When Yumi is attacked by one of the vicious toys, she descends into her home's basement following a dream she's had the night before and inadvertently re-awakens Paris, who is all too happy to pick up where he left off.

The webcomic is available in its original

versions for free on online.

The Dummy's Dummy contains examples of: