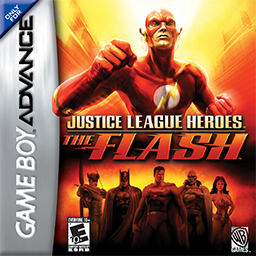 A 2006 Beat 'em Up developed by WayForward Technologies for the Game Boy Advance based on the DC Comics character The Flash. It is a side story to its big brother game, Justice League Heroes.
Advertisement:

Patrolling the streets of his home city, the Flash is attacked by villainous mooks, including killer robots, which he finds out of place (as he puts it, "Keystone's usually a robot-free zone"). After learning of the threat as a worldwide issue from the rest of the Justice League, the Flash must race to defend various cities, such as Gotham and Metropolis, from the invading armies.

The player controls Flash, goes around beating up enemies with Super Speed powers, and can summon one of several other Justice Leaguers to assist them in battle.