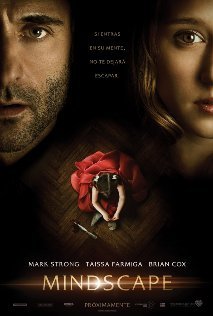 Mindscape (known as Anna in its United States release) is a 2013 Psychological Thriller film directed by Jorge Dorado in his filmmaking debut, written and produced by Jaume Collet-Serra, and starring Mark Strong and Taissa Farmiga.

John Washington (Strong) is a recently widowed man who works for Mindscape, a detective agency that employs psychics with the ability to enter people's memories to solve criminal cases. Being one of its best agents, and in need for money due to his personal troubles, Washington asks for a case, and is given that of Anna Greene (Farmiga), a brilliant but troubled 16-year-old girl from a disgustingly rich family who is on a hunger strike and has possibly attacked family members. By entering Anna's memories, Washington has the task of determining if she is a victim of dark schemes or a manipulative sociopath herself. Things then become muddled.

Unrelated to the novel Mindscape.