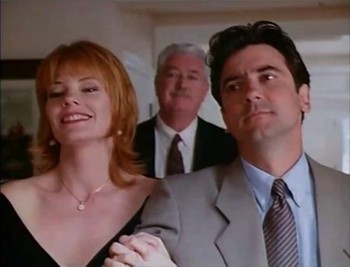 Partners is a 1993 short film (36 minutes) directed by Peter Weller.

Dean (Griffin Dunne) is a junior associate at a fancy law firm who has just been made partner. His boss Edward takes Peter along for a meeting with Terry Bidwell, owner of a shipping business, client of the firm. They're greeted at the door by Terry's gorgeous wife Georgeann (Marg Helgenberger), much to Dean's shock, as Georgeann was his girlfriend back in college. Suddenly Dean seems willing to throw his formerly promising law career away to get back with his Old Flame.