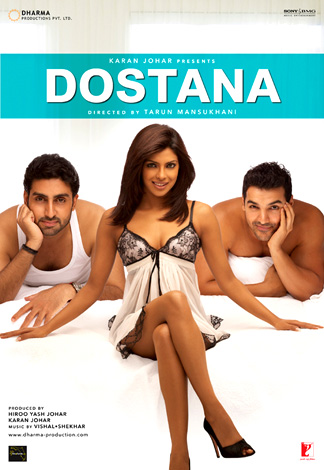 Dostana (Friendly) is a 2008 Bollywood movie starring John Abraham, Abhishek Bachchan and Priyanka Chopra. Sam and Kunal think they have found the perfect apartment, but they learn that only women may rent it because the owner, Neha, would prefer not to live with potentially sketchy guys. Sam and Kunal immediately claim that they are gay, in order to get around this. They also claim they've been a couple for three years (when they've only known each other for a few hours, at most.) They get to live in the apartment and even form a great friendship with Neha. But then complications arise when both men fall in love with Neha. Or do they?