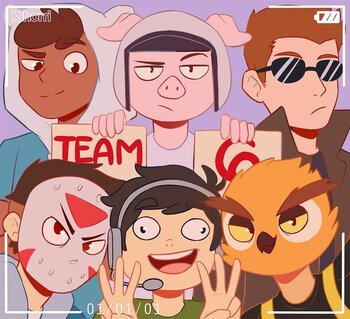 or simply Vanoss, is a Canadian Let's Player. He is most commonly found playing in Grand Theft Auto V, Garry's Mod, or Nazi Zombies.

Silly, slightly cunning, and relatively focused when he wants to be, Vanoss stands out as an almost perfectly generic description of any Let's Player. He simply tries to have fun when playing and goes out of his way to cause any action he comes across, even his own, to become sillier in some way, says something unrelated at the time to go out of his way to make other players flip their lids or just does something stupid, risky, or in no way worth it at all to get a funny response. He is also fond of editing his videos

, and will often go out of his way to get friends to act them out and place the skit in the lead up to any video or at any point within a video.

Often seen hanging out with a set of other YouTubers and Let's Players, most notably with:

Also, of note, all of the people listed above tend to play together regularly enough that they can easily be grouped together, but they do all have their own videos and collabs, and they often have their own friends that they bring in to their own videos. A few more names you might occasionally see here and there across the different channels include SilentDroidd

(and his buddy Kryoz Gaming

, who are friends with various members of the central group. Vanoss himself isn't the head of this group of Let's Players (no one is), but he does frequently come up with ideas, and introduces and leads some of their videos—and has the most subscribers out of all of them. However, it's not uncommon to see any one of others in the group take charge in any given video. This group does not have an official name, but typically gets referred to as Vanoss and Company, the "Banana Bus Squad" (after one of their nicknames for a vehicle in GTA V) or some sort of variation thereof by their fanbase.

Other gamers who are heavily featured in the examples below but who are, for various reasons, no longer actively associated with Vanoss or the others are Craig Thompson (Mini Ladd), Lui Calibre, and Ohmwrecker.

Vanoss' signature look is based on his GTA V online character, being comprised of (always) an owl mask and either a red and white jacket with a black undershirt or a makeshift Batman suit that he uses in his "Bat Owl" guise (the latter look has replaced his Luigi player model in Garry's Mod).

In January 2019, his gaming channel ranked 32nd in the list of most subscribed YouTubers

. As of August 2021, he has 25.7 million subscribers and over 14 billion views since his first videos which started around 2012. His channel at one point gained more subscriptions-per-day than known YouTube giant PewDiePie. In 2014 alone, his subscriptions rose from approximately two million to over ten million.

On March 13, 2021, Vanoss, co-starring with BasicallyIDoWrk, Terroriser and WILDCAT, began releasing a new webseries, Alpha Betas, on his channel.

. He has an article on The Other Wiki here.

Vanoss also stars in the YouTube Red animated series Paranormal Action Squad alongside SeaNanners and Mr Sark, and has a series of animated skits of him and the Crew by Pegbarians

Tropes related to Vanoss and his friends include: