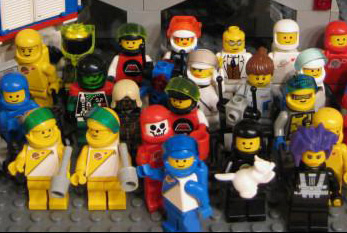 Just a sampling of the many, many characters inhabiting the universe of Lego Space.
Advertisement:

is a Photo Comic about LEGO's classic Space line. While mainly a comedic series, it can get surprisingly dramatic depending on the currently-running arc. There are many storylines, all running concurrently, with three identifiable main ones:

Each of these, and mini-arcs focusing on minor characters, are intertwined; plot points from all storylines affect each other, making for an elaborately woven plot, yet the presentation of the strips makes it such that the reader never gets confused when this happens. Add the fact that each character is distinct in their characterization and you have a well-written comic that keeps the reader guessing while being fun to read as well.