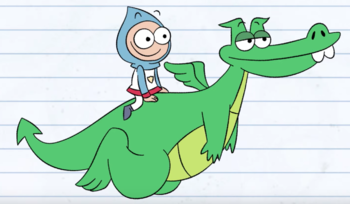 (Dragon is the green one)

Boy And Dragon is an animated fantasy comedy series started in August 2019, featuring (would you believe it?) a hero Boy and his best friend Dragon. Set inside a child’s notebook, our protagonists play inside a malleable reality and contend with a range of antagonists.

In contrast to many other Web Series, Boy And Dragon is notable for it's traditional hand-drawn animation style.

The series can be seen on the official YouTube channel