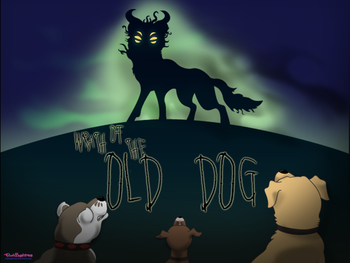 Wrath of the Old Dog is a horror board game created by Andrew Grondin. The game features art by Pink Saphires

. It was successfully funded on Kickstarter in 2015 and released in fall of 2016. The game's premise follows a pack of ordinary neighborhood dogs as they battle a who's who from the Lovecraft bestiary. Two maps (one cul-de-sac, and one a dockside) represent the playing field, and each map has two Scenarios. Scenarios describe the monsters and win or loss conditions for each of the three "nights" of play. The game has a dynamic difficulty, with the Dogs getting powered up for each win, and the subsequent nights becoming harder with each loss. As getting a custom Dog in the game was one of the Kickstarter goals, there are a ton of playable characters in the game. The Scenarios are:

The game uses six-sided die to resolve challenges, modified by Attributes associated with each Dog or Monster. Dogs use Sense, Scamper, and Scrap to represent their abilities. Monsters use Vigilance, Velocity, and Violence for the same. Similarly, both parties have special powers that affect gameplay. Monsters have powers related to their classic stories, while Dogs have Breed and Unique powers. Breed powers are based on the AKC classification of the Dog:

Unique powers are specific to each Dog. They include passive buffs, active enemy debuffs, attack options, and defensive abilities.

Monsters are controlled by the player with the Monster Token, which rotates at the end of each turn. A ten point Doom Track monitors how close the players are to a win or loss condition.

Wrath of the Old Dog is available on The Game Crafter.