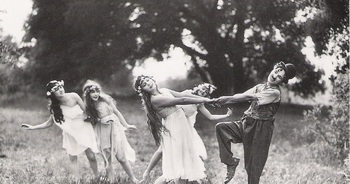 Just Charlie and some wood nymphs

In this one Charlie is a very unfortunate farm hand who is constantly abused and victimized by his tyrannical boss. Charlie gets up at 4 am and works until late at night, milking the farmer's cows, harvesting the farmer's eggs, and also working in the shabby hotel that is the farmer's other business. The one bright spot in Charlie's existence is the pretty girl in the village (played by Chaplin's regular female lead, Edna Purviance), whom he is romancing. Edna has actually accepted his ring, but when a sophisticated rich guy from the city arrives in town, Charlie's romance is threatened.