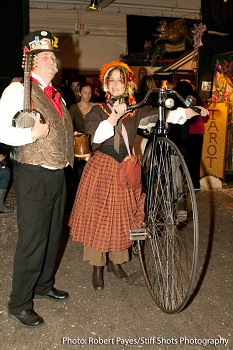 Let's go living in the past...
Advertisement:

A long-running, immersive San Francisco reenactment event dreamed up by the same people who pioneered the modern Renaissance Fair. The Dickens Fair turns a landmark warehouse

into Christmas Eve in 19th century London over the weekends in between Thanksgiving and Christmas. As the name suggests, Charles Dickens and his literary creations (particularly from A Christmas Carol) are featured heavily, but there are also plenty of other sights, sounds and even smells offered in terms of food, crafts, and entertainment. It's basically for people who feel that Ren Faires are a little too far in the past, but ComicCon/Cosplay events are equally too modern/futuristic. That qualifies the Fair as either a tourist trap, or the most fun you can have with too many clothes on...

Learn more about the Fair here