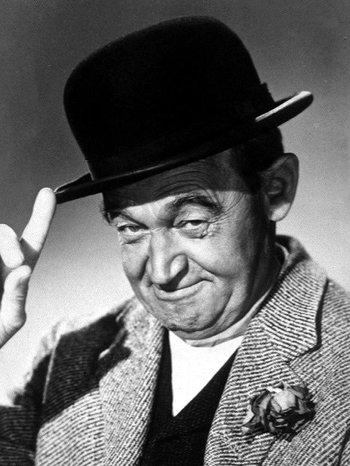 Barry Fitzgerald (10 March 1888 – 14 January 1961) was a much-beloved Irish character actor during The Golden Age of Hollywood.

Born William Joseph Shields in Dublin, he was originally an insurance salesman, coming into acting later in life. He got his start performing the works of Sean O'Casey at the famed Abbey Theatre, including Juno and the Paycock and The Plough and the Stars. He quickly found his niche as comic relief. His earliest film roles were reprising his roles O'Casey's plays for film. He was a favorite of John Ford, who cast him in many of his classic films including How Green Was My Valley and The Quiet Man. His half-brother, Arthur Shields, was also an actor and appeared in many of Ford's films as well.

His Star-Making Role was the irascible priest Father Fitzgibbons in the Bing Crosby classic Going My Way, which won him both (unwanted) celebrity and the Academy Award for Best Supporting Actor.

Barry Fitzgerald retired from acting in 1959 and moved back to Dublin. He died of a heart attack two years later at the age of 72.