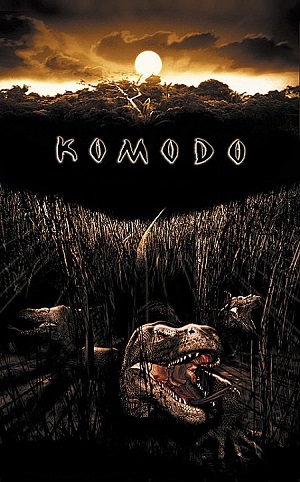 On Emerald Island, you are at the bottom of the food chain.
—Tagline
Advertisement:

Komodo is a 1999 direct-to-video thriller from the writer of Anaconda, directed by one of the people responsible for the special effects of Jurassic Park, Michael Lantieri, and starring Kevin Zegers and Billy Burke.

During the 70's, some Komodo Dragon eggs were dumped on the beach of a North Carolina island. Somehow, the baby Komodos survived, and twenty years later they have grown up and taken over the island for themselves. Young Patrick has lost his parents and his dog to the lizards, but didn't see them himself, which has left him traumatized. Now, with his therapist Victoria, who doesn't believe the Dragons are real, he is returning to the island to confront his fears. Soon people are being chomped, and Patrick and Victoria must fight for their lives if they ever hope to make it back home.

Despite its name and creatures, The Curse of the Komodo and Komodo vs Cobra are not sequels to the film.