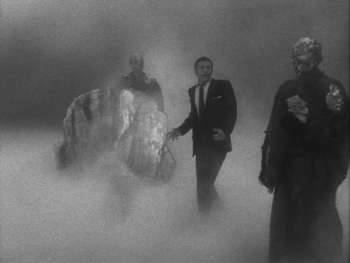 Dr. Simon Holm (Sam Wanamaker) is greeted by his new neighbors.
The Control Voice: The planet Luminos: A minor planet, sultry and simmering. Incapacitated. Earth scientists have concluded that there could be no life on Luminos, that it is too close to its own sun, and that its inhabitants would be victimized by their own blighting atmosphere. But there is life on Luminos — life that should resemble ours, but doesn't. Desperate life, suffering a great and terrible need. The Luminoids have begun to search the universe in an effort to gratify that need. They seek a planet on which life is healthy, vibrant, strong, and mobile. They need such people to do their work, to labor and slave for them, to manufacture their splendored dreams. The Luminoids need slaves, and they have chosen the planet off which their slaves will be abducted. Not too many at first, a neighborhood-full, perhaps. A neighborhood like mine or yours. Those who will be abducted sleep in dreamy ignorance, unaware that they are about to become the subjects of a grotesque and sophisticated experiment... a feasibility study.
Advertisement:

The inhabitants of a six-block suburban area are abducted one night by an alien probe, using a means of teleportation to transport the entire neighborhood to another planet, Luminos. The intention of the Luminoids is to study the feasibility of enslaving the entire human race to do manual labor on their planet, since Luminoids themselves suffer from a genetic disease that condemns them to become as immobile as rocks as they age. But, the aliens must overcome humanity's own susceptibility to that disease - from either a touch, or by breathing the same air - and the willpower of mankind's resistance to slavery. The abductees soon discover that if they survive the humid, viral climate, and avoid the possibility of becoming infected, the immobile Luminoids will abduct Earth's remaining population, condemning them to enslavement. In the end, the abductees decide to sacrifice themselves for the sake of mankind by voluntarily contracting the same disease, thus driving the Luminoids' feasibility study to a failure, and forcing them to give up on their goal. Back on Earth, all that's left of their neighborhood is a crater that's been cordoned off by the authorities.

Advertisement:
The Control Voice: "Do not enter upon or cross this area. Do not touch or remove possibly radioactive dirt or rocks. If you have any knowledge concerning this disappearance, please contact your nearest police department." It could have happened to any neighborhood. Had those who lived in this one been less human, less brave, it would have happened to all the neighborhoods of the Earth. Feasibility study ended. Abduction of human race: Infeasible.

One of the few episodes to receive a Remake in The Outer Limits (1995).