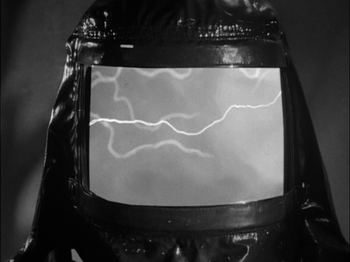 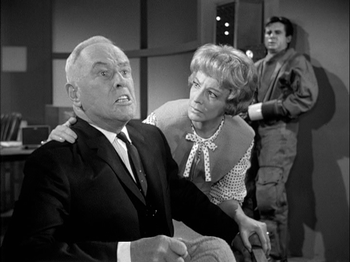 ...while Dr. Marshall, Laurel and Griffin wonder how they'll explain all this to OSHA.
The Control Voice: In recent years, nuclear physicists have discovered a strange world of subatomic particles, fragments of atoms smaller than the imagination can picture, fragments of materials which do not obey the laws of gravity. Antimatter composed of inside-out material; shadow-matter that can penetrate ten miles of lead shielding. Hidden deep in the heart of strange new elements are secrets beyond human understanding – new powers, new dimensions, worlds within worlds, unknown...

Malevolent energy beings enter through a portal opened by accident, and only a cowardly scientist can stop them.

The Control Voice: As Man explores the secrets of the universe, strange and inscrutable powers await him. And whether these powers are to become forces of destruction or forces of construction will ultimately depend upon simple but profound human qualities: Inspiration. Integrity. Courage.

Production and Decay of Strange Tropes: