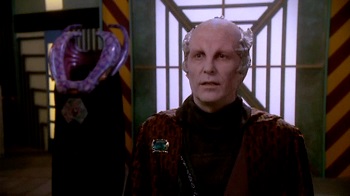 "I am called Valen, and we have much work ahead of us."
We're stealing a station to fight in a war that was over a thousand years ago. We're all mad.
—Susan Ivanova

The crew had gotten a message from their future, Sinclair came back to the station, they all took off, sans Garibaldi to Sector 14 because they were the ones who stole Babylon 4, but in the process, Sheridan was lost in the timestream, where he finds himself facing an irate Emperor Mollari. Londo shows him the devastation wrought on Centauri Prime, fallout from the war 17 years ago. He has the guards take Sheridan away, warning him to make peace with whatever gods he believed in.

As he paces in his cell, he suddenly starts getting pulled into the timestream again, where Zathras sees him. As he settles back in the future, the Delenn of that time is thrown in. She comes over and hugs him, telling him she didn’t tell them anything, that she isn’t afraid, their son is safe, and that she loves him before kissing him. Clearly quite a bit has happened in seventeen years.

The rest of the crew are on Babylon 4 to arrange for its move through time. They manage to clear out one section of the station to give them space to work.

In the future, Sheridan interrupts Delenn and tells him what he remembered last. She remembers him telling her about this years ago, and gives him dire warnings about some of the things they go through before the Centauri come for them. They are marched back to the throne room to find Londo nearly passed out. He is just coherent enough to tell them that he’s being controlled by a creature attached to his neck, but he can put it to sleep with enough drink for a while. They have until it wakes up to escape with a ship he’s made available for them. As they leave G’Kar comes in and Londo says his keeper will awaken soon and warn "the others" of the escape.

Londo: We have unfinished business between us, G’Kar. Let us make an end of it, quickly. Before it stops me. I am as tired of my life as you are.

G’Kar grabs Londo’s neck and begins squeezing, but the Keeper awakens and forces Londo to retaliate. Meanwhile, Sheridan begins slipping into time again. Delenn gives him some advice before he goes.

As Sheridan slips away, Vir comes into the throne room, finding Londo and G’Kar’s dead bodies and picks up the Seal of the Centauri Republic, thereby becoming emperor.

Zathras has devised a means to keep Sheridan there if he reappears, but Marcus and Ivanova are skeptical. They talk a bit about the time they’re going to, and how Valen emerged from that time. She wonders if they’ll get a chance to meet him, but they’re interrupted when Sheridan appears again.

Zathras: Nobody listens. Quite mad, they say. It is good that Zathras does not mind; he has even come to like it.

Sheridan asks for a status update, and they tell him they can proceed. He and Sinclair head to attach the beacon to the power core. Zathras warns that it is very delicate, but Major Kranz, fearing a hostile presence, pumps up the power levels, accidentally activating the beacon, and moving them through time, four years ahead, exactly when B4 showed up last time. Ivanova tries to get a hold of Sheridan but Sinclair says he’s gone again, and there’s another problem.

The station’s staff are having problems of their own and, believing they’re about to explode, manage to convince Major Kranz to evacuate. As he orders a signal sent out, another tachyon burst erupts. Delenn flashes forward and sees herself in Sheridan’s quarters looking over a snowglobe when the door opens and a woman’s voice says, “Hello.” Delenn is so stunned she drops it.

The flash ends and, but there’s no time to make sense of it; Sinclair arrives considerably aged, an effect of entering the tachyon field unprotected last time, and why he didn’t want Michael along. There’s no time to worry about that, they still need to get the job done, and they need to get Sheridan’s stabilizer fixed before they lose him for good. Zathras thinks he can fix, but he needs tools. Sinclair will go try and keep the beacon stable.

As Marcus monitors the readings, they pick up the shuttle flight Sinclair led to Babylon 4 two years ago.

Meanwhile, Zathras manages to get the time stabilizer fixed, but is found by station security. Ivanova reports the situation, and says she going to try and reach C&C to have more direct control, while Kranz explains the situation to Past!Sinclair and Garibaldi, including Zathras.

Delenn, meanwhile runs off and is able to find Sheridan as he reappears again. In C&C, the lieutenant orders everyone out, and Ivanova manages to sneak in. As Zathras explains what’s happening someone calls for the major, saying, "It's back!" He, Sinclair and Garibaldi rush out to see a figure in a blue space suit fading in and out. Zathras follows and says, "It is the One!"

Ivanova manages to get control and warns Sinclair off.

Past!Sinclair reaches out to the figure, but when they touch he is knocked back. Zathras then rushes over to the One, and hands over the time stabilizer. The One vanishes and Zathras tries to escape but is captured again. He warns them that they are finished and must leave or be trapped there forever.

Back near the White Star, Marcus finds Sheridan and rushes over to help. He realizes someone switched time stabilizers with him, since the one he has wasn’t damaged.

Marcus: But if you’re here, who's running around out there in a blue suit?

The answer comes when Zathras is pinned under a support beam, and finds The One standing over him, removing the suits's helmet to reveal Delenn.

Sinclair comes back after trying to contact Garibaldi and warn him of the impending betrayal, but the shuttle was already out of range, a fact he laments to Delenn.

In C&C, they make final preparations, and Sinclair tells them to go back to the White Star, but Marcus stops him. He figured out that someone will need to go back with the station, and Sinclair admits he’s right, but that he’s still the one who needs to go, because he told himself in a letter he wrote 900 years ago. The others aren’t happy but eventually agree to let him go, besides, the aging effect will probably kill him if he doesn’t.

Before they go, Zathras shares some words with Sinclair, Sheridan and Delenn about what he's learned.

Sheridan and Delenn bid Sinclair their farewells and slowly leave.

As the White Star emerges from the temporal rift, the crew discuss what happened, and Delenn reveals that something happened a thousand years ago to cause human and Minbari souls to start merging. Her change was partly to restore balance between them. If the ancient Minbari had found Babylon 4 with a human aboard, they would never have accepted it.

During the transition, Sinclair uses a triluminary to enter a chrysalis similar to Delenn’s and become a Minbari, and as the ancient Minbari come aboard he introduces himself to them as Valen.