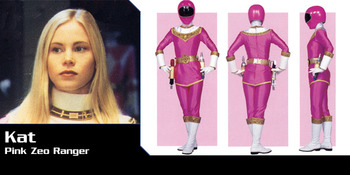 The second Mighty Morphin Pink Ranger, Kat found her Zeo Subcrystal in the Australian Outback as a child. After having her original age restored, Kat became Zeo Ranger I - Pink.

Note: This section is only for tropes used in Zeo. For the rest, see the character sheets for Mighty Morphin, and Turbo. 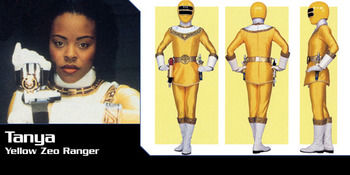 When Master Vile turned the Rangers into children with the Orb of Doom, Aisha, the second Mighty Morphin Yellow Ranger, found a Zeo Subcrystal in Africa, only to give it to Tanya in her place. After growing to a teenager with the others, Tanya joined the four veteran Rangers as Zeo Ranger II - Yellow.

Note: This section is only for tropes used in Zeo. For the rest, see the character sheet for Power Rangers Turbo. 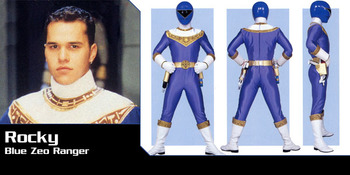 Note: This section is only for tropes used in Zeo. For the rest, see the character sheet for Mighty Morphin' Power Rangers. 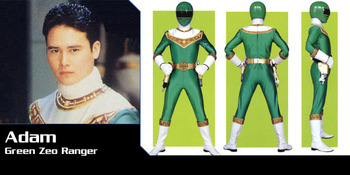 Note: This section is only for tropes used in Zeo. For the rest, see the character sheets for Mighty Morphin, and Turbo. 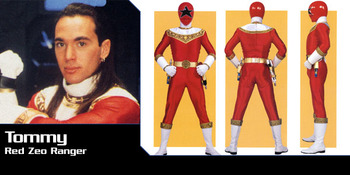 The Mighty Morphin Green and White Ranger, Tommy found his Zeo Subcrystal in a Native American Village as a child. After having his original age restored, Tommy became Zeo Ranger V - Red.

He now has his own page here.

Trey of Triforia / Gold Ranger I 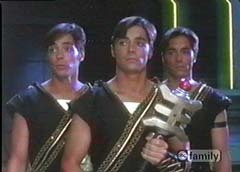 When the battle between the Zeo Rangers and the Machine Empire was growing intense, a mysterious Gold Ranger appeared to help the Rangers out. While his identity was secretive, he was known as Trey of Triforia, a Triforian with three distinct personalities. 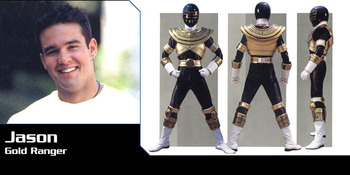 The original Mighty Morphin Red Ranger, Jason left Angel Grove to go to the Peace Conference in Switzerland. However, when Trey was forcibly separated into his three personalities, Jason's friend Tommy came up to him to become a Power Ranger once again, and he became the second Gold Ranger.

Note: This section is only for tropes used in Zeo. For the rest, see the character sheet for Mighty Morphin' Power Rangers. 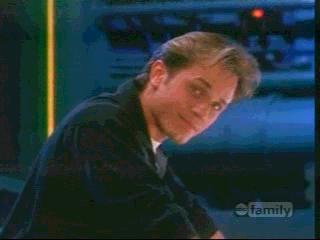 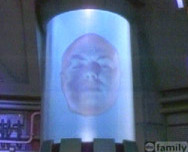 Portrayed by: David Fielding note Via archive footage
Voiced by: Bob Manahan, Jorge Santos (Latin American Spanish)
The original mentor to the Mighty Morphin' team, and continued to guide the Rangers during their fight against the Machine Empire. 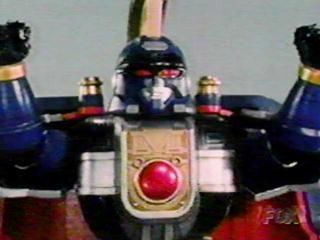 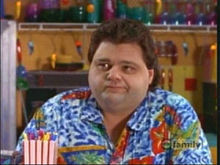 Portrayed by: Richard Genelle
Voiced by: Luis Alfonso Padilla (Latin American Spanish)
The owner and bartender of the Youth Center. 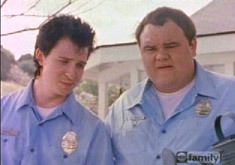 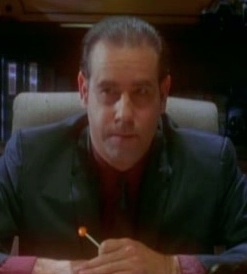 Portrayed by: Erik Ray Frank
Tommy's long-lost brother. David is the protector of one half of an arrowhead that contains great power which must be kept out of evil hands. Tommy met David when he was sent on a quest out in the desert.

Portrayed by: Lesley Tesh
A biker girl that shows up not long after Jason becomes the Gold Ranger. She and Jason end up in a relationship eventually.

Portrayed by: Rio Dekin
Tanya's boyfriend at the start of the series. They break up eventually and decide to remain friends later in the show.

Portrayed by: Darren Press
A Jewish classmate of the rangers. He attends the same computer lab as Tanya and Adam.
Advertisement:
The Machine Empire 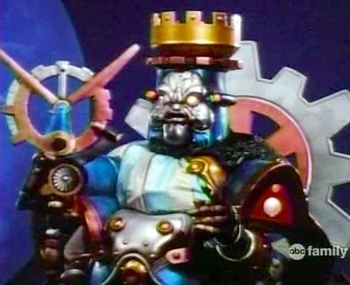 The ruler of the Machine Empire, King Mondo, and his family separated from the United Alliance of Evil so they could invade Earth. 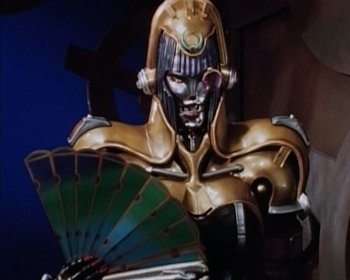 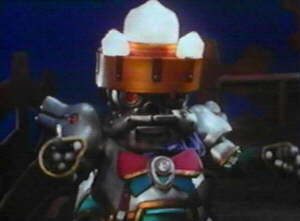 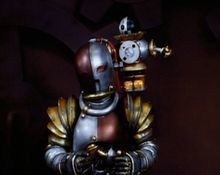 Servants to the Royal House of Gadgetry, the two served as the Empire's monster enlargers.

To destroy the Machine Empire, Rita and Zedd created Louie Kaboom, a missile-themed robot monster, to infiltrate the Royal House of Gadgetry when it was at its most vulnerable. However, he soon broke away from their control and became the temporary leader of the Machine Empire. 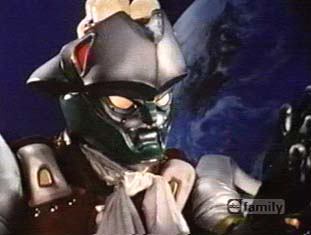 The oldest son to King Mondo and Queen Machina, Gasket was exiled after he married Archerina, daughter of one of Mondo's rivals. However, he was brought back by his mother to reclaim the throne and oust Louie Kaboom. 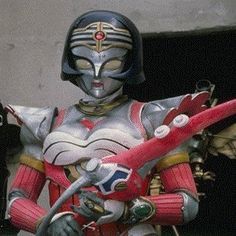 An archer themed robot and Prince Gasket's wife. She arrived with him after he was summoned by Queen Machina.

Mechanical servants who serve as the foot soldiers of the Machine Empire.
Monsters

Voiced by: Derek Stephen Prince
A star-based robot and the first monster the Machine Empire sent down to destroy the Zeo Rangers.

Voiced by: Michael Sorich
A clown-themed monster sent to amplify a baby's cries to destructive levels.

Voiced by: Derek Stephen Prince
A robot-excavation monster sent down by King Mondo to erupt a volcano on Angel Grove.

Voiced by: Paul Pistore
A puppet robot for a children's show that was corrupted by the Machine Empire.

Voiced by: Dave Mallow
A vulture with a camera for a head that transported the Rangers into Prince Sprocket's movie dimension.

Voiced by: Dave Mallow
A robotic donkey-themed faucet monster. He would later be revived to convert Earth's water into oil.

Voiced by: ???
A traffic light-cat monster.

Voiced by: Dan Woren
A race of aliens that have water-polluting powers. One was sent down to Earth to pollute the water.

Voiced by: Eddie Frierson
A piranha-themed monster sent down to stop the Rangers from getting fuel cells for Billy's ship.

Voiced by: Alex Borstein
A female love robot that can cause people to fall in love with their appliances.

Voiced by: Richard Epcar
A heat-manipulating scorpion robot sent down to cause greenhouse effects on the Earth.

Voiced by: Brad Orchard
An energy-draining monster that badly damaged the Zeo Megazord and was the first to battle the Red Battlezord.

Voiced by: Bob Papenbrook
A boxing monster dispatched by Prince Sprocket to fight the Red Battlezord.

Voiced by: Brad Orchard
A spiked robotic armadillo monster that was the first to be defeated by the Zeo Mega Battlezord.

Voiced by: Lex Lang
A scrap metal monster created to trick the Rangers into believing that he was defecting from the Machine Empire.

Voiced by: Dan Woren
A drill monster that appeared in Adam's dream.

Voiced by: Dave Mallow
A toy robot that was given to Prince Sprocket as a new toy.

Voiced by: Michael Sorich
A wrecking ball monster that Prince Sprocket received as a birthday present.

Voiced by: Ezra Weisz
A robot admiral monster that was to be the leader of the new armada that King Mondo was building.

Voiced by: Steve Krammer
A cyborg werewolf monster, and the first monster to face off against the Gold Ranger.

Voiced by: Bob Papenbrook (Borox)
Voiced by: ?? (Silver Team Commander & Starboard Winger)
A race of bounty hunters that went to Earth to take the Gold Ranger powers. One of them, Borox, aligned himself with King Mondo.

Voiced by: Dave Mallow
A tentacle-based monster, and the only Machine Empire monster that the Rangers never fought before the Neo-Plutonium Armor upgrade.

Voiced by: Kirk Thornton
A warrior monster Prince Gasket created by infusing Tommy's powers and skills into it.

Voiced by: Richard Epcar
A robot monster that was guarding a time-turning item.

Voiced by: Kirk Thornton
A warrior monster sent down by Archerina to destroy Kat.

Voiced by: Brianne Siddall
A caterpillar monster made from a fishing lure.