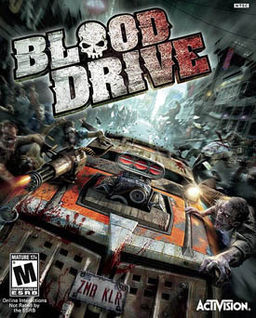 Jackson Is About to Run You Over.
"Eight brutal competitors! Eight deadly vehicles! And over twenty thousand ghastly undead! Who will be champion? Who will be roadkill? Let's find out!'' -The announcer, describing the championship proper.
Advertisement:

Blood Drive is a Vehicular Combat game developed by Sidhe (Makers of Shatter) and released by Activision in November of 2010.

It's Next Sunday A.D. following a Zombie Apocalypse. Civilization remains, though society is scarred by the harsh reality of living in a world overrun by zombies. They have turned to Blood Sport to entertain themselves, in the form of Blood Drive: a violent tournament of Vehicular Combat and zombie-splattering. The tournament takes place in the desert gambling city of Las Ruletas. This particular tournament involves eight different drivers with distinct vehicles and interesting backgrounds.

The player must first complete five preliminary tournaments, or cups, before being allowed to enter the championship cup. Each cup consists of one or more map zones with a certain number of events, between two and four. There are a variety of events, such as kill the most zombies, kill the most cars, kill the most everything, checkpoint races, and "King of the Skull" (Think Halo's oddball with Weaponized Cars). Once the qualifiers are complete, the player may enter the Blood Drive championship, which in essence is the "Story Mode." Upon winning the championship at least once, the player becomes eligible to enter The Hardcore Cup. Think you got what it takes?

The game is Bloody Hilarious and fun but is marred by balance issues and a total lack of local multiplayer. Not to be confused with the Syfy series of the same name.