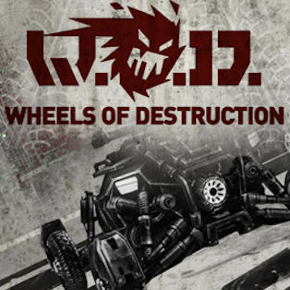 Wheels Of Destruction, often written as "W.O.D." with the O being the shape of a saw blade with an angry face, is a downloadable Vehicular Combat game developed and published by Gelid Games on April 3rd, 2012. It can be found on PlayStation Network.

It's After the End, and you are a participant in an automotive Blood Sport. That's about it, but hey.

The game is best described as an arena shooter like Quake or Unreal Tournament, but with Weaponized Cars. The base game features five cars with varying stats, five maps centered in the ruins of major cities, and three game types: Deathmatch, Team Deathmatch and Capture the Flag. At your disposal are four weapons, one you spawn with and three others obtainable via Power Ups. The game has up to twelve player matches online or offline against bots.

Wheels Of Destruction provides examples of: