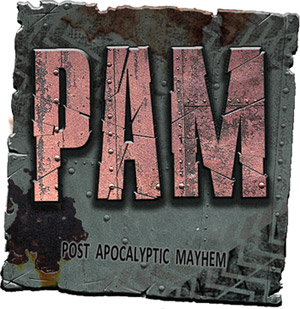 Get ready for the Mayhem. -PAM Launch Trailer
Advertisement:

Post Apocalyptic Mayhem, or PAM for short, is a Vehicular Combat game by developer Steel Monkeys, creators of 2 Days to Vegas and Spy Hunter: Nowhere to Run. It was released on March 17, 2011, on Steam.

It's After the End, with the Apocalypse How left unexplained. There is no Excuse Plot, no tutorial (unless you count the quick reference in the options menu) and very short load times. The only thing that matters is action. Twelve different war-wagons, each with distinct weaponry, battle it out over five sprawling tracks to see who can score the most kills.

Players can compete against AI-controlled vehicles in single races or three-track tournaments. They can also go online to compete against up to five other players in ranked or unranked matches.