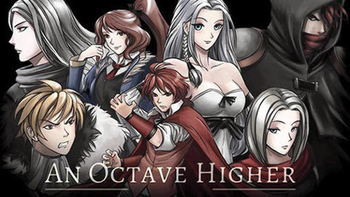 A Visual Novel created by Kidalang,

An Octave Higher tells a story of magic, industrial revolution and social upheaval.

Magic is a fact of life in the kingdom of Overture. Any person can cast magic, provided he or she has access to Mana, and every single machine depends on magic to function. It can be used for many things, from brewing tea to producing drinkable water for water fountains to treating people’s injuries. There is one thing it cannot do, however: healing magic cannot be used on inanimate objects. Franz knows this, and yet he must prove that it can be done if he is to defend his thesis and graduate from the prestigious Conservatoire. When an attempt to secure grant funding from an aristocrat’s son backfires, he finds himself in the right place at the right time to meet Elise, a cheerful factory worker who wants nothing more than to fix a broken piano lying out in the factory yard. And despite his initial skepticism, Franz soon becomes convinced that she holds the key to unlocking the mystery.

Together with Frederic, the aristocrat’s son, they find themselves embroiled on the adventure of a lifetime. Can they succeed at this seemingly impossible task? Can Franz defend his thesis and graduate? Can Elise find an escape from the toil and drudgery of a factory worker’s life? And can Frederic swallow his pride enough to become their friend, or will his arrogance and short temper bring trouble down upon their heads?

Even as tensions flare between them, the shadow of revolution looms over Overture. Aristocrats and the bourgeoisie have unrestricted access to magic, but the proletariat are only given enough Mana to do their jobs and nothing more. And in the face of poverty, starvation and poor living conditions, an extremist group called Libertad, led by the mysterious Amadeus, prepares to overthrow the government and put Mana in the hands of the people.

And when our three heroes cross paths with these would-be revolutionaries, nothing will ever be the same again…

It also has a Prequel, following the early life of Janis Woolf, titled One Small Fire at a Time.