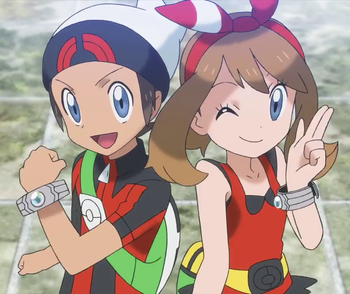 is a short 4-minute trailer for the remakes of Pokémon Ruby and Sapphire.

The trailer begins with Brendan being waken up one morning by his Treeko. He goes outside and spots his next-door neighbor May with her Torchic and Mudkip. The trailer then cuts to Brendan battling a Youngster and his Zigzagoon while, elsewhere, May gets attacked by a Pokémon horde in a forest. May is seen challenging Roxanne, which leads to her Mudkip evolving.

Afterwards, the trailer shows off a bunch of Mega Pokémon that appear in the games. Near the end, May is depicted during a Contest while Brendan challenges Steven to become the next Pokémon League Champion. The trailer ends with May and Brendan on Mega Latios and Latias before the rest of the legendaries are depicted.

This trailer provides examples of: