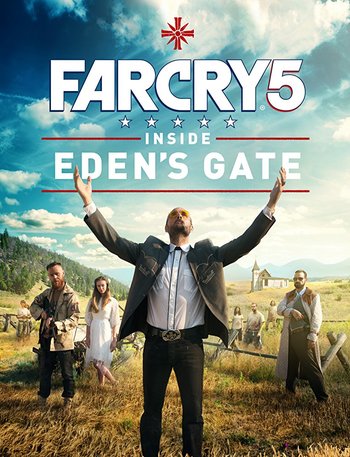 Far Cry 5: Inside Eden's Gate is a live-action short film that serves as a prequel to the events of the game Far Cry 5.

Three vloggers, Alex, Hannah, and Sara come to the remote Hope County in Montana, following a request by a resident named Mark, who is also a friend of theirs. Mark's sister, Linny, has fallen under the sway of a fanatical cult called The Project at Eden’s Gate, and he hopes to rescue her. To find out what happened to her, the four then infiltrate the cult. Horrified by their findings, they put their lives on the line to warn the world.

Produced by Ubisoft and Asylum Entertainment, the film was released on March 5, 2018 on Amazon Prime and uploaded to YouTube

a month later by Ubisoft North America. Greg Bryk reprises his role as Joseph Seed from the game.