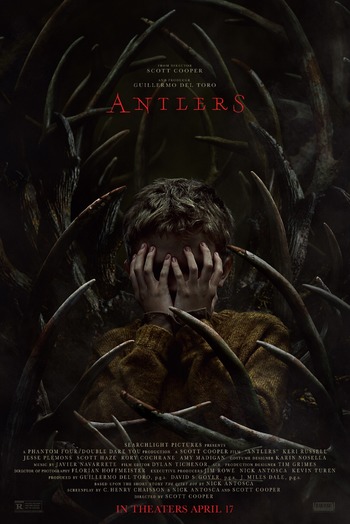 Pray it desires not you.
"Once there were three bears that lived in a dark and wet cave above a small town. Big bear, little bear, and baby bear. Big bear, you should take care of the little bears. But big bear got sick, lost his job, and his insides turned black. One day, little bear came home, and big bear and baby bear were different. Big bear's sickness has gotten worse. Big bear has become more angrier and meaner, because they had no food, no meat. But they had each other."
— Lucas Weaver
Advertisement:

Antlers is a 2021 supernatural horror film directed by Scott Cooper and produced by Guillermo del Toro and starring Keri Russell and Jesse Plemons. It is based on the short story The Quiet Boy by Nick Antosca.

Set in the town of Cispus Falls, Oregon, the film follows a small-town teacher named Julia Meadows (Russell) and her brother Paul (Plemons), the local sheriff, becoming entwined with a young student in her school named Lucas Weaver who is harboring a dangerous secret with frightening consequences.

The film was originally scheduled for release in the United States on April 17, 2020, but due to the COVID-19 Pandemic, it was postponed. It was eventually released on October 29, 2021.