Theatre / The Good Person of Szechwan 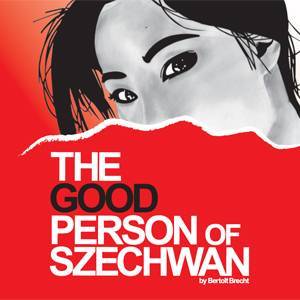 Der Gute Mensch von Sezuan (The Good Person of Sezuan) is a 1943 play by Bertolt Brecht. It follows the story of Shen Te, a prostitute, and Wang, a water seller, who both come from the city of Szechwan in China. One day, three Gods come to Szechwan, looking for a good person. However, they're not really interested in finding said good person; they just want to get it over with so they can go home. Wang greets them, and they're keen to declare him their good person, but he's having none of it. He leads them to Shen Te, who's equally reluctant to be called a good person. However, she does allow the Gods to stay the night, and in return, they give her a bag of money, and decide that she is indeed a good person.

Shen Te uses this money to buy a Tobacco shop from one of the locals, Mrs Shin, on the promise that "the local miners come in here all the time", leaving out the crucial detail that they never buy anything. Mrs Shin and several other locals begin taking advantage of Shen Te's kindness — so much so that she starts pretending to be her own non-existent cousin, a man named Shui Ta, whom she becomes whenever she needs to be unkind to someone.

The play is well-known for the hidden communist propaganda it contains, with Brecht using Shen Te's need to invent Shui Ta as a way of showing how impossible it is to be good in a capitalist society. Of course, this means that the play wasn't performed in Brecht's fatherland for some time after it had been written.

Note that the title is often translated as "The Good Woman of Szechwan", which is not only wrong,note That would be "Die Gute Dame/Frau von Sezuan". but it completely ruins the ambiguity of the title.

The Good Person of Szechwan contains examples of: