Fanfic / A Man of Iron 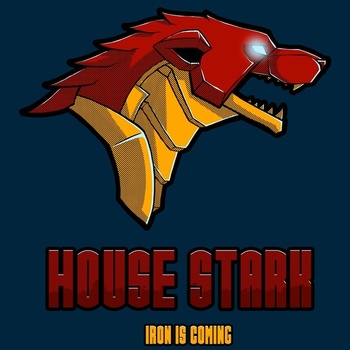 The image that started it all
Nikolos Fury: Stark is the first. He won't be the last.
Varys: How does that old saying go? The last song is ended and a new one begins?
Nikolos Fury: Yes. A Song of Metal and Marvels.
Advertisement:

A Man of Iron (Book 1) is a Fusion Fic crossover between A Song of Ice and Fire/Game of Thrones and the Marvel Universe, reimagining Tony Stark and other Marvel Comics characters as part of Westeros and Essos. It is written by Mr. Chaos and can be found on Fanfiction.net

It is now complete. A Man of Iron is also the first in a series titled A Song of Metal and Marvels.

Antony 'Tony' Stark is the arrogant cousin of Ned Stark whose made his fortune crafting fine weapons for the lords of Westeros. Tony leads a joyful life, doing as he pleases and leaving the politics of the realm to others. But when a violent attack nearly ends his life, Tony decides to take action and creates a hero for the people to rally around... a knight known as Iron Man. But little did anyone know that by doing so, a new age would be ushered in. An age of Metal and Marvels!

Book 2, A Crack of Thunder, can be found here

and it has been completed.

Book 3, A Shield of Man can be found here

. It is currently ongoing.

Book 4, A Web of Lies, has been announced to be the sequel to A Shield Of Man.

A Man Of Iron and its sequels contain examples of: