Fanfic / Harry Potter and the Nightmares of Futures Past 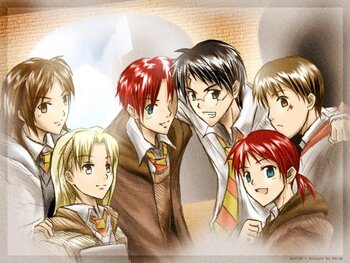 The Golden Trio is now the "Gryffindor Six".
Sorting Hat: Your plan is an audacious one; you seek to meddle with the workings of Fate itself.
Harry: Well, I had literally nothing left to lose.
Sorting Hat: True. I wish you well in this endeavour. Never fear, I will keep your secrets. The more who know the greater the risk.
Advertisement:

Harry Potter and the Nightmares of Futures Past

The story opens with an adult Harry finally defeating Voldemort after fighting him and his Death Eaters for about thirteen years. The victory is extremely hollow, however; the war has directly or indirectly claimed the lives of virtually every named character in the series and Harry has lost everyone he ever loved and then some. Then, as a potentially fatal case of depression begins to settle in, Harry uncovers theoretical texts in the ruins of Hogwarts that suggest a means by which to travel backwards in time.

With nothing left to lose, Harry gambles his life on a second chance, and hits the jackpot when his spirit merges with his younger self partway through the summer before his first year at Hogwarts. In classic Peggy Sue fashion, "young" Harry then begins subtly altering the timeline to make things better... with mixed results.

Harry's efforts to change the future create as many problems as they solve, and the multiple layers of conflict in the story prevent Harry's advanced skills and greater power from making things too easy for him.

On May 13, 2019 the story disappeared from FanFiction.net, with the author clarifying on his website that this was due to an accusation of copyright infringement involving song lyrics (namely, "Weasley is our King", which Harry sings in Chapter 28), though it is still available at other locations and he is appealing to the site directors to undo their decision. The fic has since been made available on various other sites, including:

and a forum where he posts occasional word count updates. Viridian Dreams Quests are run out of his forum.

open/close all folders
A-C
D-G
H-M
N-R
S-Z
Harry: Fighting him again is nothing, if I have a chance to do it better this time.
Dumbledore: Do it better, Harry?
Harry: I plan to cheat like Draco Malfoy on a wick check.