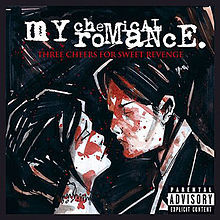 Three Cheers for Sweet Revenge is a Concept Album by the Alternative Rock band My Chemical Romance, released June 8, 2004. The album chronicles a relationship between a man and woman, who are separated by death. In order to be with his lover, the man makes a Deal with the Devil. However, there is a catch: the man must kill a thousand evil souls.

Behind The Black Parade, Three Cheers is seen as the band’s defining breakthrough and one of the best emo albums of the early 2000s. Tracks such as the eager "I'm Not Okay (I Promise)", the heavy "Helena", and the heartbreaking "The Ghost of You" have become staples of MCR’s discography.

Thank You for the Tropes: