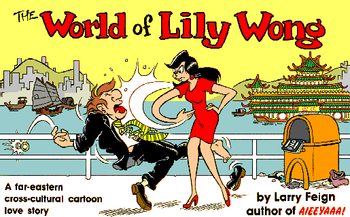 The World of Lily Wong

was a comic strip by Larry Feign, an American resident in Hong Kong. It ran in several Hong Kong newspapers from 1986 to 2001.

The title character is a Hong Kong woman married to an American expatriate. The comic focuses on Lily's daily family and professional life, among her live-at-home parents, her ne'er-do-well brother, her henpecked husband and her ethnically mixed baby daughter. The name of the comic is a parodic Shout-Out to the classic movie The World of Suzie Wong.