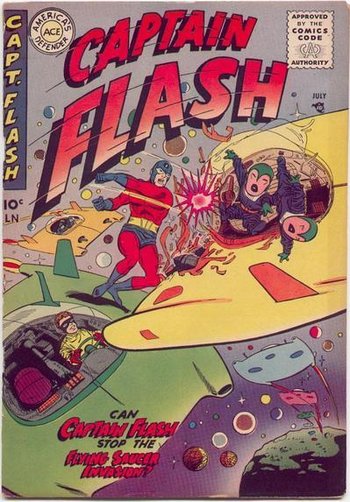 Captain Flash (sometimes shortened to Capt. Flash) is a Superhero from The Interregnum, created by Martin Smith and published by Sterling in Captain Flash #1-4.

Keith Spencer is a science teacher in Atom City, where many nuclear tests are conducted. One day, a test goes horribly wrong and Keith has to shield his students from a radioactive blast. Preparing for his seemingly-inevitable demise, Spencer soon discovers that he has no ill effects. In fact, he has gotten superpowers. Spencer decides to use his abilities for good, becoming Captain Flash!

The character was revived in Femforce. Tropes for that version go there.