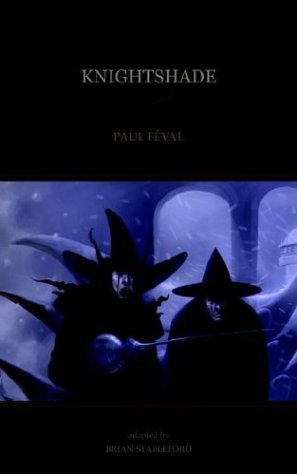 "In the middle of the Great Hungarian Plain there are two graves, each covered by a black stone, both of which carry inscriptions. On the larger one. Jean Ténèbre, Chevalier; on the smaller, Ange Ténèbre, Priest. They are the Ténèbre brothers..."
Advertisement:

Written in 1860 - almost 40 years before Bram Stoker's Dracula - Knightshade is one of three classic vampire stories penned by Paul Féval, along with Vampire City and The Vampire Countess.

Educated men say that they are the tombs of two French noblemen who came with many others to help the voivode John Hunyadi defend Christendom against the Turks four hundred years ago. Men who are not educated affirm that for four centuries there has lain beneath these marble slabs an oupire and a vampire: one an eater of human flesh, the other a drinker of human blood.

On many occasions, during the four hundred years, those graves have opened, to the terror and the horror of the surrounding country. Sometimes, two corpses were found beneath the stones, one tall and one short, which gave every indication of recent death: eyes open and shining, blood liquid in the veins, tongues moist and lips red. At other times, the open graves displayed nothing but their emptiness: two black cavities from which the odour of death emerged. It is certain, moreover, that many attempts have been made to destroy these graves: the marble slabs have been broken, the rubble dispersed, the ground levelled-and invariably, when some time has passed, the two black stones resurface beneath the grass or the corn, intact once again, bearing the same funerary inscriptions.

It is certain-as the registers of the courts testify-that within the last twenty years alone, the brothers Ténèbre have been hanged in a dozen different places in Hungary, and seven times impaled in Turkish territory...