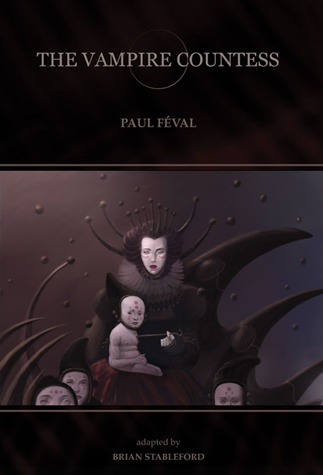 ""In vita mors, in morte vita!" An appropriate motto for a vampire! "In life, death; in death, life!""
Advertisement:

Written in 1856 - over 40 years before Bram Stoker's Dracula - The Vampire Countess is one of three classic vampire stories penned by Paul Féval, along with Knightshade and Vampire City.

"I read the most astonishing of all books last night... The Legend of the Ghoul Addhema and the Vampire of Szandor, printed in Baden in 1736, by Professor Hans Spurzheim, doctor of the university of Pressburg. The vampire Addhema took the life of her victims at a discount, so to speak, living one hour for each of their years, while ceaselessly roaming the world collecting treasures for the king of the living dead, Count Szandor. She loved him adoringly, under a curse, and he sold her his kisses for the price of a gold piece each.

"The particular gift of Addhema was to be reborn as beautiful and young as love itself every time she could apply to the hideous bareness of her skull a living head of hair. I mean a scalp, torn from the head of a living victim. This was why her tomb was full of the skulls of young women and adolescent girls. In much the same fashion as the savages of North America who strip the flesh from the heads of their vanquished enemies and carry their scalps away as trophies, Addhema selected and carried off to her sepulchre the most beautiful and happiest faces she could find, so that she might tear from their heads the prey that would secure a few days of youth-for the spell only lasted a few days: as many days as the years of life that remained to the victim. At the end of this period a new forfeit was necessary, and a new victim.

"Addhema could not surrender herself to a lover before having told him her own history. In the middle of a conversation of love she had to bring up the strange story that I have just told you, speaking of dead girls, of scalps torn away, and relating with exactitude the bizarre conditions of her death in life, her life in death. I employ the past tense, because she once broke the rule governing her hideous resurrections, and that was while she was bearing the blonde hair of our mother. Love made her forget her strange duty. She received the kiss of a young Serb, as beautiful as the day itself, before having sought and found the opportunity to set out her supernatural history. The evil spirit withdrew at the very moment when she stammered words of tenderness, and the young Serb recoiled in horror at the sight of his mistress restored to her real condition: the cadaver of an old woman, fleshless, icy cold, totally bald and already turning to dust."

Lila, grace incarnate, The Enchantress. Lila was the cadaver. René saw her change while he slept: change rapidly, passing through all the successive stages of degradation which separate exuberant life from death... from that frightful death which hides its ruin in the depths of a tomb. That rosy cheek had turned ghastly white, and then the bones had burst through the corroded flesh. René had always responded with a scornful smile to anyone who asked him whether he believed in vampires, female or male-and yet he could not dislodge that striking image from his thoughts, in spite of its absurdity: the bald corpse, resting in the tomb for centuries, then waking up young, ardent and lascivious as soon as a living head of hair, still moist with warm blood, covered the horrible nudity of its skull.

While that astounding transformation had taken place before his very eyes, the black hair-that splendid head of hair-had slowly detached itself, like a clinging parchment shrivelling up in a fire. Then a sort of fissure had appeared above the face, extending around the temples. The dried-up skin corroded, revealing a frightful skull... René wanted to run away, but his body was leaden. He wanted to cry out, but he no longer had a voice.

The Vampire Countess provides examples of the following tropes: