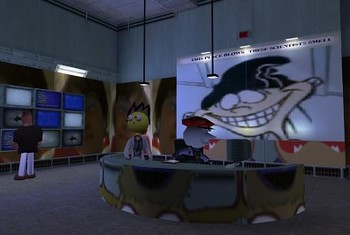 That's only a fraction of how weird it gets.
Advertisement:

is a, uh, strange Game Mod of Half-Life in development under lemurboy123

and inspired by various in-jokes from the two and their peers, as well as their YouTube followers. Various enemies and characters are replaced by strange figures such as the bad-mouthed, synthesiser-voiced Jamie

, as well as characters like Shrek, Carl Wheezer, and the ever-hungry Pumkin

. The weapons have also been refitted with custom textures and sounds, such as a dog and an RPG launcher that shoots the phrase "OH NO".