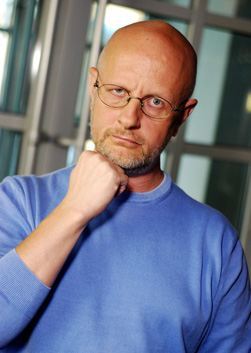 Dmitry Yurievich Puchkov, better known by his pseudonym "Goblin", is a fairly jack-of-all-trades figure in today's Russia, especially notorious among Internet-savvy circles. He is best known for his GagDubs of some popular Western movies and one not-so-popular Russian one. Even though there were only six of them, "Goblin translations", made by the studio "God's Spark" ("Bozhya Iskra"), are the archetypical example of the Gag Dub in Russia, having inspired countless imitators.

The specific movies that were subject to this treatment are The Lord of the Rings trilogy (which remains the most popular of the bunch), The Matrix, The Phantom Menace, and the Russian criminal movie Bumer. This last one is at times considered the point of Jumping the Shark, since it was a Russian-to-Russian "dub" that Puchkov was paid for, and it's often considered the least funny of the bunch. The God's Spark dubs ceased in 2004, however a revival was planned in 2013 with the Gag Dub of The Hobbit. The Lord of the Rings dubs were later adapted into books

Puchkov is also known for non-humorous "correct" translations, often to movies that he believes are too heavily Bowdlerized by official dubs (when they have them at all). These take roots from (and sometimes homage) the tradition of bootlegged one-voiced dubs of the 1980s and 1990s, when Western movies first flooded through the collapsing Iron Curtain without official dubs. Some of those were actually blessed as official and shown on TV or in cinemas. Critical opinion on them is divided.

He has also written a couple of nonfiction books, and keeps a blog with the occasional political commentary. He is a somewhat controversial figure because of his conservative views, reeking of (among other things) homophobia, whitewashing the Soviet Union (including Stalin), and persistent bile against liberal democrats across the world, both in Russia and abroad. Especially hateful of Aleksandr Solzhenitsyn's writing for perceived slander and selling out to the West.

Additionally, a number of video games have been created based on his work, usually with Puchkov being the lead writer. Examples include a hack-and-slash based on his The Lord of the Rings dubs and a squad-based RPG called Dungeon Cleaners (released in the US as Planet Alcatraz) based on Puchkov's novel, which in turn is loosely based on Quake and Puchkov's knowledge of the criminal world from his days as a police detective.