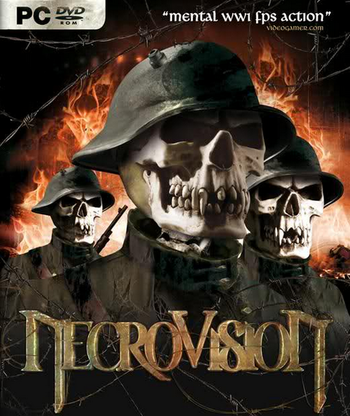 NecroVisioN is a Fantasy First-Person Shooter developed by The Farm 51 on the Painkiller engine and published in 2009 by 1C. Set in 1916, you play as Simon Bukner, a U.S. Soldier enlisted in the British Army during World War One. As you progress, you discover things much more dark and sinister than the horrors of The Great War while fighting such enemies as the German Imperial Army, zombies, and demons.
Advertisement:

Although the game uses a standard Halo/Modern Warfare style control scheme (with iron sights aiming, melee attacks, and grenades), the gameplay is more comparable to faster-paced arcade shooters such as Doom, Painkiller, and Serious Sam whereas you face swarms of enemies. Combat is a combination of shooting and different styles of melee. The game has a bullet-time mechanic, and also rewards creative kills (headshots, melee combos, etc.) with a brief period of extra damage called Fury. Chaining together multiple combos also restores your health and bullet-time.

Received an expansion in February 2010, a prequel entitled NecroVisioN: Lost Company. This time, the player takes control of Doctor Jonas Zimmermann as he hurries to deliver a cure for the wave of zombies overtaking the German camps... and in the process begins the path to obtaining Shadowhand and becoming the Necromancer.

"I never wanted this. I just wanted to fight my war, not get dragged into yours. But you took that all away from me."