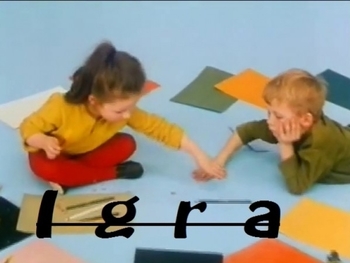 A boy and a girl, maybe of kindergarten age, are sitting on a floor drawing on colored paper. The boy breaks his pencil lead, and the girl refuses to hand her pencil over, instead giving him a sharpener. After the girl draws a flower on her piece of paper, the boy, annoyed, draws a picture of a car—which comes to life, starts up, drives over to the girl's picture, and squashes her flower. The girl draws holes in the tires of the car, which promptly deflate. After the girl draws an avatar of herself on her paper, which also comes to live, the boy draws a mouse, which he sends over to scare the girl's avatar...and an Escalating War starts in which the hand-drawn cartoon warfare between the little boy and the little girl grows steadily more brutal.

A mixture of live action, for the children, and animation for their drawings.