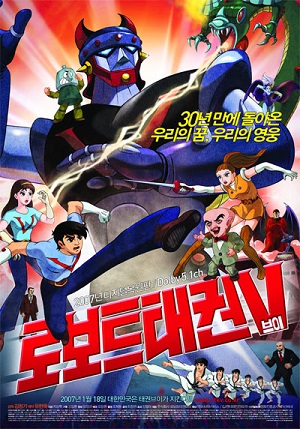 In short: A Korean ripoff of another mecha show, that grew the beard and became a success in its own right. note It should be mentioned that Koreans today, especially the younger generation who are aware of the fact that it started out as a ripoff, don't like to talk about that fact.

Robot Taekwon V (released in America as Voltar The Invincible) was a 1976 South Korean animated film that inspired many sequels and comic books. In Japan it's known as a Mazinger Z ripoff, but the creator Kim Cheong-gi freely admits that it directly inspired him and mentions that Mazinger Z is popular in South Korea.note It's also important to note that South Korean laws enacted in the Cold War forbade any South Korean from legitimately purchasing/obtaining Japanese-made media, including video games. The laws were removed in 1990 after Seoul and Tokyo began to establish and improve foreign relations between each other, with the exception of not allowing Japanese shows and music to be aired anywhere in South Korea. Seoul, however, has made suggestions that a gradual lifting of the ban will be done eventually. As of 2010s, there are no signs of a ban of Japanese media product left, minus some episodes of kid's shows being censored or localized when they contain too much Japanese traditions.

The series is one of the first few franchises in South Korea to start the Super Robot trend in Korean fiction.

A Mad Scientist named Dr. Kaff builds giant robots to kidnap world-famous athletes and use their powers to Take Over the World. Dr. Kim makes a super robot to fight Dr. Kaff's robots sent from the Red Empire. His eldest son Kim Hoon, a young Taekwondo champion, must use his martial arts skills to pilot it. He is joined by his Action Girlfriend Yoon Yeong in the fight against evil.

The show has been digitally restored after a duplicate print was discovered in a Korean Film Commission warehouse. It was released in cinemas in the early 2000s with DVDs released recently. Some of its sequels also had digital restoration and were also released on DVD.

The Taekwon V franchise consist of the following movies:

The franchise also had plans for a live-action movie and an MMORPG game in the late 2000's, although it's most likely that these plans have permanently stalled. There is also multiple manhwas published based on Robot Taekwon V.

for a clip of the OP.