Literature / The Gate to Women's Country 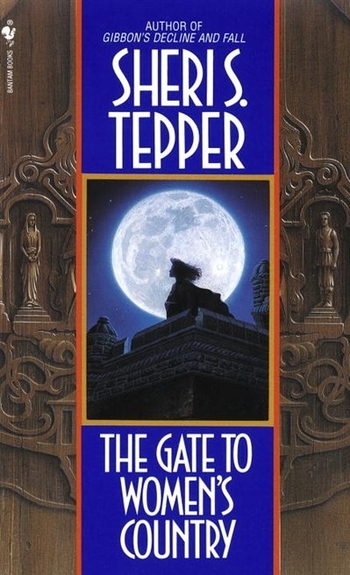 It's a familiar backstory. Three hundred years ago, humanity nearly destroyed itself in a nuclear war. Out of the ashes, a few survivors built a new society, Women's Country, which dedicated itself to making sure that no such destruction would ever happen again. They formed a new social order: the women would live inside their walled cities, dedicating themselves to education, farming, and rebuilding civilization, while the men would live outside the walls as warriors, dedicated to protecting the city.

Twice a year, each city throws a carnival, when the men are allowed to visit inside the walls for a few weeks—and during which time all children are conceived. When a boy turns five, he goes to live with his father in the warriors' garrison. Then, when he turns fifteen, he must make a choice: stay in the garrison, and become a full-fledged warrior, or return to the city and live as a servitor (a domestic worker subservient to the women). In the macho culture of the warriors, becoming a servitor is seen as cowardly and dishonorable—not surprisingly, few boys choose to do it.

The story opens with Stavia, a member of the ruling council of Marthatown, receiving a summons down to the garrison. Her son, Dawid, has just turned fifteen, and proudly declares he'll stay in the garrison. The two of them say the ritual words (he renounces all ties to her, and she tells him he's no longer her child), and Stavia sadly returns home to her two daughters and their family's servitor, Corrig.

The rest of the story takes place in flashback, as Stavia thinks back to when she was ten years old, and her family went to bring her five-year-old brother to the garrison. While she was there, she caught the eye of a warrior boy named Chernon, and the future was set in motion...

The Gate To Women's Country contains examples of: