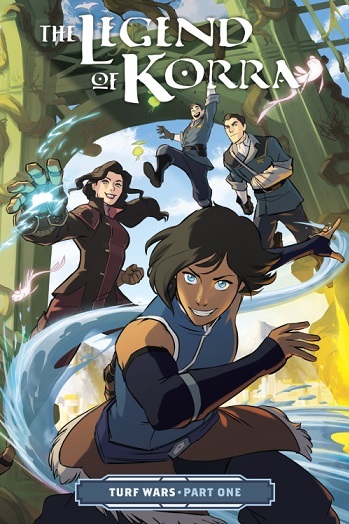 Following their trip to the Spirit World, Korra and Asami Sato discover that Republic City has fallen into a state of utter chaos. In the aftermath of the devastation caused by the battle with Kuvira's forces and the opening of a spirit portal in the middle of the city, a developer has moved to turn the portal into an amusement park, potentially severing an already tumultuous connection with the spirits. In addition, the triads have realigned and are in open conflict at the city's borders where hundreds of evacuees have relocated. In order to get through it all, Korra and Asami vow to look out for each other but must first discover how to work better as a team.

The series is followed by Ruins of the Empire, a trilogy that covers the aftermath of the Earth Empire's fall and the beginning of Kuvira's trial.

The Legend of Korra: Turf Wars provides examples of:

Alternative Title(s): The Legend Of Korra