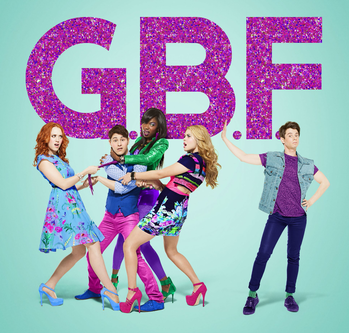 From left to right: 'Shley, Tanner, Caprice, Fawcett, and Brent.
Being out has never been so in.
—Tagline
Advertisement:

Change is sweeping the suburban North Gateway high school when magazines announce the new trend for every girl worth her heels — a Gay Best Friend (appropriated as G.B.F.), who, allegedly, will give out fashion and relationship advice while still providing a platonic, minority-inclusive friendship. Soledad (Jojo Levesque) and her group of friends attempt to start a Gay-Straight Alliance in order to find G.B.F.s for themselves except they don't have any openly gay members, which is kind of a necessary requirement. There's only one problem — North Gateway High School doesn't have any openly gay boys.

Meanwhile, students Tanner Daniels (Michael J. Willett) and Brent van Camp (Paul Iacono) are best friends who are both closeted gay guys. Brent downloads an app onto Tanner's phone that allows them to track down other gay guys in the area. However, Soledad and co. have already taken advantage of this app — and they track down Tanner's phone in public, inadvertently outing him to the school.

Having been forced out of the closet, Tanner finds himself a target for homophobic bullying, were it not for the intervention of the school's three alpha females — the beautiful and popular Fawcett Brooks (Sasha Pieterse), who rules the popular kids, the fierce and talented Caprice Winters (Xosha Roquemore), who leads the minorities and theater kids, and the ditzy goody-two-shoes Ashley "'Shley" Osgoode (Andrea Bowen), to whom the religious Christians of the school defer. All three of them want him to be their G.B.F. and endorse one of them for prom queen — so they attempt to mold him into their ideal arm candy and force him to choose between popularity and friendship...

Example of:
Make Way for the Princess