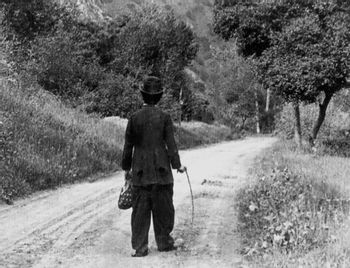 The Tramp is a 1915 short film directed by and starring Charlie Chaplin. It was his sixth film for the Essenay studio, which he had joined after leaving Mack Sennett's Keystone Studios at the end of 1914.

While not the debut of the Tramp character—Chaplin had invented the character for his second film at Keystone and had appeared in the Tramp costume for almost all of the three dozen Keystone films he appeared in—this film is commonly regarded as a major step forward in Chaplin's artistic development. For the first time, Chaplin branched out from broad slapstick, making a film that had pathos and emotional depth.

Charlie is The Tramp, who is wandering around somewhere in the sticks when he defends a farm girl (played by his regular female lead, Edna Purviance) after said farm girl is robbed by a dangerous hobo. Charle gets Edna's money back, and in gratitude she takes him back to the farm, where her father puts him to work in exchange for his room and board. Charlie is predictably inept at farm chores, but when the hobo and his two hobo companions try to rob the farm, Charlie helps fight them off. In the process of chasing the hobos away, the farmer accidentally shoots Charlie in the leg. Charlie is enjoying a rather pleasant recuperation when Edna's boyfriend stops by the farm. Realizing that Edna doesn't love him, Charlie writes a goodbye letter and sadly trudges away down the road—only to cheer up and stride off with the Tramp's typical spring in his step.

The film can be seen here