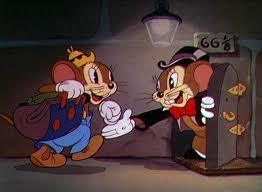 The Country Cousin is a 1936 Silly Symphonies short, produced by Walt Disney, directed by Wilfred Jackson.

It is a retelling of Aesop's fable about the City Mouse and the Country Mouse, done in opulent Disney style. Abner the Country Mouse receives an invitation from his cousin, Monty the City Mouse, to come to the city and live with him in luxury. Abner shows up at Monty's, and Monty immediately shows him an opulent dinner table that has been laid out by what must be wealthy humans. Abner takes full advantage, wolfing down cheese, having a bad experience with mustard, and getting drunk on the champagne in a glass. But there's a problem, something that has been causing Monty to constantly shush his cousin—a cat.