Fanfic / Not As Simple As A Happy Ending 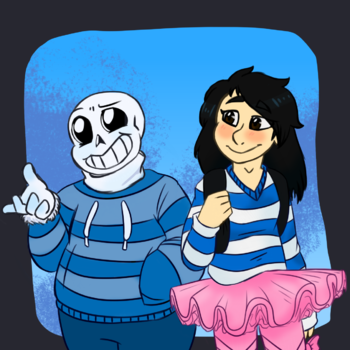 Art commissioned by the author from 89animegirl

Let me tell you about six fallen virtues, and two royal children, and a sharp-edged genius and his staff of the rejected. About two brothers—one who reached out with open arms, and one with incredible power and an even more incredible heart.
And about three children—a boy, a girl, and something not quite either—who looked at their fate and said, “No, I refuse to die.”
— Author's note
Advertisement:

Not as Simple as a Happy Ending

is an Undertale fanfiction by PastelClark

Not as Simple is a work in progress and is currently in pre-canon territory. It is fairly popular—the fanart tag on its official blog

is over 85 pieces strong, and its design for the soul of integrity has become common within the Undertale fandom. Not as Simple (as well as PastelClark in general) is known for focus on platonic love and inclusion of several OCs.