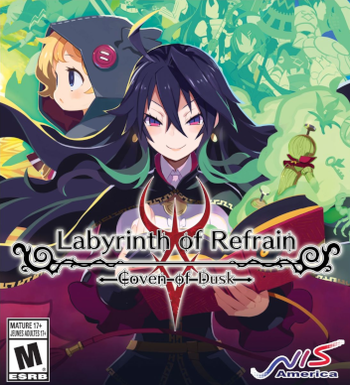 "Go forth and conquer the unexplored underground Labyrinth of Refrain!"
Advertisement:

In the game, you play as the Tractatus de Monstrum (Tractie for short). Or rather, you play a disembodied soul that has been shoved into the aforementioned book, who is used by a witch named Madam Dronya to explore a Labyrinth underneath the town of Refrain, using the labyrinth's magic to animate puppet soldiers that fight monsters for you.

While Labyrinth of Refrain is similar to games like Etrian Odyssey and Demon Gaze, it does several things which set it apart from the crowd. For one thing; party members can be assigned to "pacts", which not only allow you to assign different numbers of characters to a party slot, but also determines what types of donum (magic) they can cast. The game also has no Random Encounters; enemy can be seen on the map at all times, and can be avoided or tackled at the player's leisure.