A collection of tropes relating to the cast of BoxxyQuest: The Gathering Storm. Please remember to tag spoilers!

Catie is the fair young queen of the Boxxysphere. Two years ago, she woke up in a field with no memories, and her Quest for Identity turned into a battle to save the world. She loves to help people, but has trouble sharing her own problems with others. In battle, she’ll be doing most of the healing, but can pull out some fierce magic attacks in a pinch.

A thrill-seeking 4chan native who ended up becoming Catie’s first and best friend. There’s not much he takes seriously, but he’d put his life on the line to keep her safe. Recently, he’s started learning how to hack, with mixed results.
Til

A young lady who traveled from Tumblr to DeviantART to ask about missing shipments, and ends up tagging along with Catie afterwards. She hides her insecurities with a mask of snarkiness, and doesn’t get along very well with Anonymous.
Eddie

A studious editor from Wikipedia, who gets assigned to the party following the events at the Summit. He’s a strong physical fighter, as well as a reliable source of information about enemies’ strengths and weaknesses.
Shift 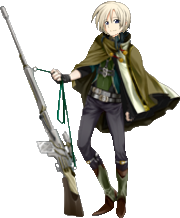 A streetwise thief living in YouTube. He joins the team to investigate a series of unusual crimes and coverups within the city.
Tyalie

A bubbly girl who teams up with Catie to find the third PasSWORD shard. Tyalie loves all games, and sees her life as one. She’s easily excitable, kinda ditzy, and just wants everyone else to have as much fun as she is.

One of Catie’s friends from her first adventure. This time, he’s determined to have a nice vacation without getting swept up in all the chaos.
Cornelia

A sweet-hearted A.I. with a Dark and Troubled Past. She was created as a weapon, but switched sides during the events of the prequel. Now she’s on vacation, and just wants to relax. She’s friendly to a fault, but has some deep-seated self-image issues.

The girl in the eye of the storm. Arianna has mysterious motives and an obsession with data. Her sudden arrival is what kickstarts the plot.
Wolfram
Dr. Stephen Wolfram is a scientist who dreams of creating technological marvels. He’s partnered up with Arianna for the time being, but he seems to have his own agenda. 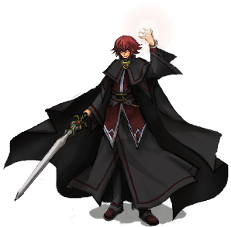 A brooding warrior who guides the party through the dangers of the First Internet. He’s actually Boxxyfan, Catie’s arch-enemy and Cornelia’s creator, prior to becoming evil. In the present day, he’s supposed to be dead, but is that really enough to stop him?
SPOILER CHARACTER
Warning: Here be major unmarked spoilers! Turn back if you haven't seen the True Ending! 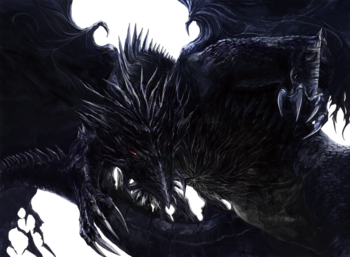 An ancient, all-consuming black dragon, and the greatest threat the Internet has ever faced. In the past, he fought Virtua for control over cyberspace, and he won, only to be defeated by the human users he sought to destroy. His soul was broken into many small, yet still sapient, pieces… known as Anonymous.
AM THE BLACK WINGS OF CHAOS... THE FIRST SHADOW, AND THE LAST...I AM THE END OF ALL THINGS, AND NOW... IT'S TIME TO DIE.
AT LAST, I LIVE AGAIN, AT THE DYING OF THE LIGHT…