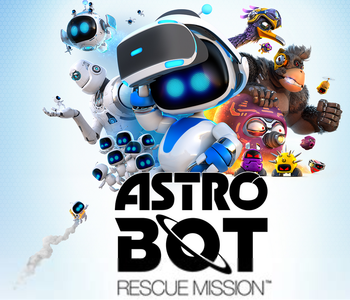 Astro Bot began life as "Robot Rescue", a minigame on the PSVR's 2016 Playroom VR app. The minigame had players controlling a single Bot moving through a 3D level to rescue his robot comrades. Fan feedback was strong enough to justify a full-fledged 3D platformer, which was released exclusively on PSVR in 2018.

The player controls two characters simultaneously. The first is Astro Bot itself. Astro Bot can jump, double jump, punch, spin attack, throw objects, and shoot lasers from its feet. While Astro Bot is nimble, he is very fragile and dies in one hit.

The second character is a different helper robot "played" by the player through first-person perspective. This robot follows Astro Bot through the levels. Generally, the function of the helper robot is an in-universe justification for the camera following Astro Bot. However, the helper robot can pick up special tools to help Astro Bot directly.

The two must work together to travel across worlds and rescue all of the Astro Ship's missing crew. Astro Bot was released on October 2, 2018 to critical acclaim, lauding it as a PSVR killer app. It was later bundled with fellow VR platformer Moss and the VR system for the 2018 holiday season.

The game received a sequel of sorts in the form of Astro's Playroom, which came pre-installed with the PlayStation 5.