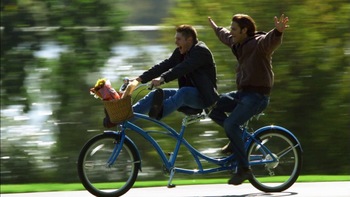 ACTUAL SUPERNATURAL SCENE
The 'Verse of Supernatural may be a Crapsack World filled with monsters, demons, angels, and other beings with zero compunctions about preying on innocent people and making life hell for the protagonists, but who says fun times can't be had?
Advertisement:

2x02 - Everybody Loves a Clown

5x06 - I Believe the Children Are Our Future

7x09 - How To Win Friends And Influence Monsters

7x20 - The Girl with the Dungeons & Dragons Tattoo

7x23 - Survival of the Fittest

Advertisement:
Season 9
9x01 - I Think I'm Gonna Like It Here

12x15 - Somewhere Between Heaven and Hell