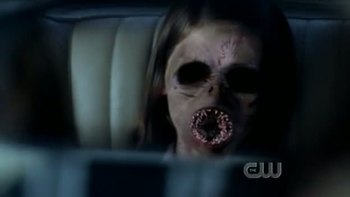 What's wrong, Mommy?
I hear the voices when I'm dreamin', I can hear them say
—Kansas, "Carry On Wayward Son"

2x02 - Everybody Loves a Clown

5x06 - I Believe the Children Are Our Future

7x09 - How to Win Friends and Influence Monsters